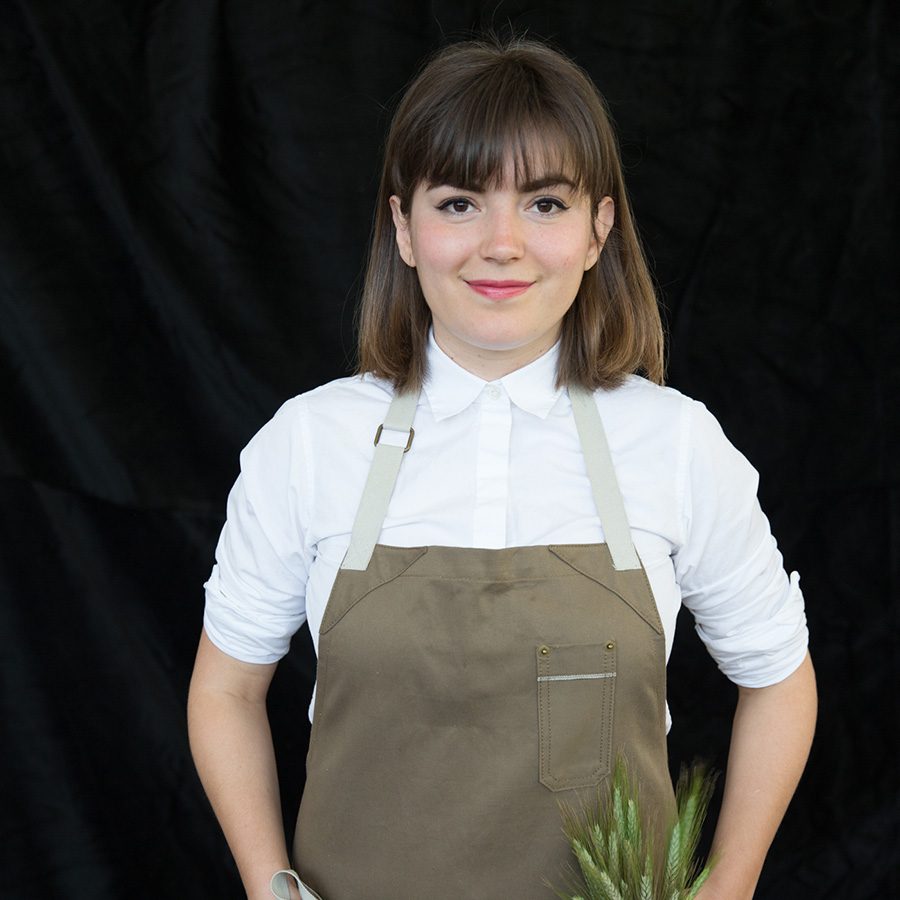 The maker episode! Celebrity makers and chefs like Martha Stewart and Mario Batali are crazy about Hedley & Bennett aprons. We learn how Ellen Bennett is building a company that brings in millions in revenues and cultivates a passionate following for something that’s so mundane on this Season Finale episode. They are at a watershed moment, bursting at the seams and grappling with how to grow. But it all started very modestly, when she ran off to culinary school at age 18, hoping to launch a taco empire in LA. We hear her amazing story of hustle and determination as she went from booth babe and lottery announcer in Mexico City to line cook in LA to successful entrepreneur. The leadership insights, operations tips, and lessons in courage are informative and inspiring. And, we learn why her factory has a zip line and two tree houses!

This episode also features two bonus conversations about making and manufacturing from the White House: we kick things off with U.S. CTO Megan Smith and colleague Megan Brewster. We also ran into Adam Savage, the host of tested.com and Mythbusters, on the South Lawn at SXSL. Don’t forget, Manufacturing Day (mfgday.com) is Friday October 7, 2016!

Ellen Bennett is the founder and creator of Hedley & Bennett, the Los Angeles based apron company founded in 2012 at age 24.

Ellen was far from an ordinary kid and fiercely independent from a young age. She loved looking at things and finding a way to make them more interesting, more functional. At a young age, she became very interested in cooking and testing out new recipes for her family. Her Mexican born mother had divorced from her Swedish/English father when Ellen was age 10 and worked long hours to support their family as a single mother. Even though she was young, Ellen took over her mother’s household and did everything from cleaning to grocery shopping to cooking. Later in life, the Los Angeles native packed up and moved to Mexico City for Culinary School to study Restaurant Administration and to continue her passion for cooking. While in school, Ellen accepted several odd jobs to pay her way through school which included a bilingual lottery announcer and talk show host for an American Football Show. Shortly after graduating, Ellen took her savings to travel around Europe, which gave her a very impactful look on life and inspired her to do it all – and so she did!

While working as a line cook at two Los Angeles’ restaurants (Baco Mercat and two Michelin star rated Providence) Ellen noticed the stale look and poor quality of the aprons she wore daily. Inspired to make a more functional apron, she worked with Josef Centeno of Baco Mercat to design her first run of aprons for his staff and that was the official start of Hedley & Bennett. Shortly thereafter, she started running between restaurants and farmers markets with bags of fabric swatches, talking to everyone she could get her hands on about this exciting new endeavor.

Each fabrication detail has been carefully considered to handle the rigorous daily use experienced in a working kitchen. Each Hedley & Bennett product is handmade in Los Angeles from start to finish using only top grade materials such as American canvas, raw Japanese selvage denim and European linens. These unique pieces (aprons, chef coats, chef hats, potholders, napkins and more) are high quality and truly built to last. Every apron also features adjustable straps with 1-inch-thick webbing to prevent cutting into the wearer’s neck, beautifully constructed brass hardware, and well-placed pockets reinforced with bar tacks to avoid ripping.

The Apron Squad literally grew one member at a time. Bennett’s personality and approach opened doors for her to meet with the most established restaurants and best chefs in the country. Between meetings and cooking at Providence, aprons were being made as quickly as possible. Soon, attention came from press like the New York Times and celebrity chef fans such as Martha Stewart and Mario Batali, solidifying her as a real player in the restaurant game. The response to her new innovative product was growing faster than she could keep up with. Eventually quitting her jobs at the both restaurants, Bennett grew her operation from a 400 square foot office space to the showroom, office space and factory she currently resides in in Downtown LA – all in under three years. The company has quickly expanded and now her aprons can be found in more than 3000 restaurants worldwide. Upon realizing aprons weren’t only for chefs but for any maker who wanted a professional grade apron to protect them while they work, she developed aprons for gardeners and potters so they too could have a garment as beautiful as the clothes they wore underneath. Since then, Bennett has collaborated with SpaceX, Google, Lexus, Delta, Four Seasons, Food & Wine and thousands of others to craft functional aprons for their specific needs.

As the founder of Hedley & Bennett, Ellen’s initiatives are to grow a Made in America brand, create more jobs, contribute to society on a larger scale, and continue to inspire people to dream big and do big because anything is possible!