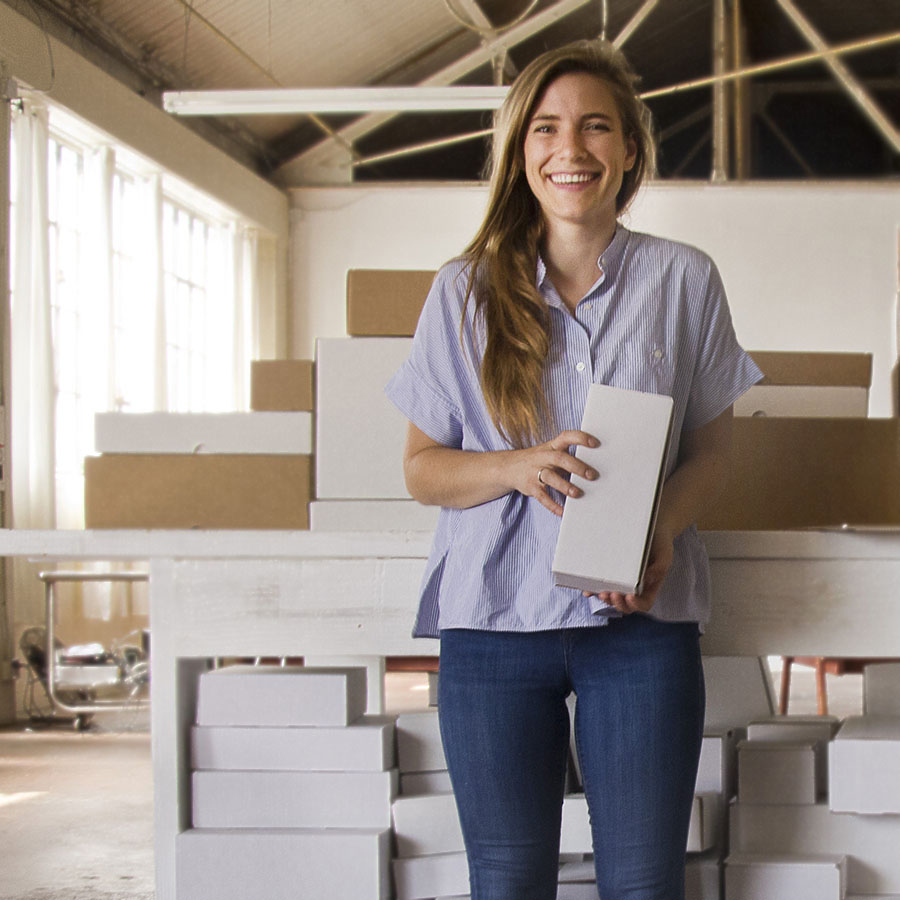 Packaging should be your secret weapon, and Jesse Genet can show you how. At age 15, Jesse started her first business printing t-shirts in Detroit. Over the next year she followed her curiosity, tracked down an obscure invention, and next thing she knew her new company Inkodye ended up on Shark Tank and participated in the prestigious incubator Y-Combinator. Through becoming a manufacturing entrepreneur, she learned how easy it was on the digital side to start a business, but on the physical side it was the complete opposite.

That’s when their big idea hit: why don’t they create a whole platform for startups to handle packaging and fulfillment? And Lumi was born. Jesse tells horror stories and practical advice about packaging and logistics. She gives insights into new ecommerce trends like direct-to-consumer retail and Vertical Commerce Brands that make your packaging more important than ever before. And she also shares her real-life experiences and perspectives on being an entrepreneur. (Her stories about stalking the original owner of the Inkodye technology, turning down Mark Cuban, and what happened as she was about to walk onto the set of Shark Tank are pretty hilarious.) She’s energetic, nerdy, and unapologetically quirky, and she has some great advice you won’t want to miss.

“[When designing packaging] ask yourself what is the overall impression you are trying to give? What is the most minimal packaging to achieve that?”

“They buy 2000 boxes and three or four pallets show up at their SoHo apartment. [But they could just] get custom tape that fits in a drawer.”

“That beginner’s mindset that you had when you’re learning to do something for the first time? [As an entrepreneur] you have that every day.”

“All entrepreneurs have their glossy story… but that’s their sizzle reel.”

1:20 – It’s much easier than ever to start a company – except for the physical part.
2:25 – Her experience running first company, Inkodye, inspired Lumi.
4:25 – She has an idea, she assumes it’s been invented before. “No hubris”
5:45 – At age 16 she tracked down the owner of the invention, finally get him to agree to license the technology.
8:30 – The difference between trade secrets vs. patents.
10:30 – There is a new trend of “vertical commerce brands” and “direct-to-consumer” that are transforming retail.
12:00 – Packaging is more important than ever. It’s an integral communication element for a brand.
15:40 – Jesse shares an example: MeUndies is packaged in a bag with a “freshness seal.” It communicates a message, and the packaging is inexpensive to produce and handle.
17:35 – The fundamental value proposition: to make it easier to make changes when it serves the business. In the past, making special Valentine’s packaging would be unthinkable.
24:15 – The economics of where you manufacture. You want to make your boxes within 100 miles of from where you ship. The less an item costs to shop the more likely you can make it farther away for cheaper. More than 75% of products that Lumi sells are made in the USA.
25:40 – Rule of thumb: spend 0.5-3% of purchase price on packaging.
26:30 – When you design your packaging, consider your image: are you a luxury brand? If not, don’t spend too much. Consumers are savvy; they notice and complain about paying for over-packaging.
28:00 – The basic questions to ask yourself: basket price, what is really needed to move your product safely, do you really need a box? Simple packaging is not only cheaper, it’s less costly to ship and store.
30:00 – Be wary of inventory exposure; only stock 2-6 months of packaging.
31:10 – Consider how much storage space you have. You don’t want 3-4 pallets of boxes to show up at your Soho apartment. You can order custom tape that will fit in a drawer.
32:00 – Jesse talks about her entrepreneurial life. She’s never had a job, and has never made money unless customers paid for what she was selling.
34:30 – No one is a natural at being an entrepreneur. It takes practice to have a stomach of steel for risk. It’s overwhelming at every juncture, and she had to learn a completely new set of skills. She quotes someone, “The skills that got to where you are today aren’t going to get you where you want to go.”
36:30 – Beginners mindset every day.
37:10 – Stress and risk is like a muscle. The more you do it, the stronger you get.
38:00 – Jesse tells the story about being on Shark Tank. How she turned down the sharks. When you go into a high-stress situation, you need to know what your limits are.
41:20 – First time she publicly tells the story of her iPhone-toilet mishap on Shark Tank.
47:10 – Failure is overrated. But just having been through the toilet disaster gave her the courage to face Mark Cuban and turn him down.
48:30 – The Shark Tank experience, although she didn’t get a deal, was a blessing in disguise. She and her partner realized they weren’t thinking big enough. Lumi was born.
49:30 – The paradox of entrepreneurs needing to be determined, yet to listen and adapt. Investors are looking for entrepreneurs who are never going to stop. But the idea still has to evolve and grow.
50:50 – When evolving your company based on input, ask yourself what the kernel of your company is.
53:10 – As a kid she wanted to learn about the world and not be a consumer. That’s how she became an entrepreneur. She started printing t-shirts and selling then at age 15.
55:00 – Inspiration comes from doing and experimenting. She followed her curiosity and ended up geeking out on chemistry and innovating a new process that became a company, and then another company.
55:50 – Curiosity is key
57:00 – Her appreciation for manufacturing came from growing up in Detroit and her step-dad taking her around to factories.
57:50 – She restored a ’69 Lincoln Mark III with suicide doors and drove it to school every day as a teen.
1:02:00 – Entrepreneurs are never at their “destination.” You need to make peace with the journey.” Success for her is learning and getting better. Long-term she wants to have an impact on startups.
1:04:30 – Don’t let your identity be wrapped up in your company. What if your company blows up tomorrow?
1:06:15 – Her Twitter bio is “I stuck with a simple idea for an unreasonable amount of time.”
1:07:00 – You need a passion for what you’re doing. Make sure you’re willing to stick with your original mission for 5-10 years. Otherwise your business will fail.
1:08:00 – “All entrepreneurs have their glossy story… but that’s their sizzle reel.”

Jesse Genet is the Founder and CEO of Lumi.com. Lumi makes it easy for businesses to order the branded packaging and supplies they need to ship their products. Genet has been an entrepreneur since 16 when she started her first company, printing t-shirts in her parents Michigan basement. Before launching Lumi.com, she invented and launched Inkodye — a fabric dye that develops its color in the sun. Together with her co-founder Stephan Ango, they’ve stocked Inkodye in over 1500 retail stores.

At 28, Genet has raised over a quarter million dollars on Kickstarter, been featured on Shark Tank, appeared on HSN, and most recently participated in Silicon Valley accelerator Y Combinator. She studied Industrial Design at Art Center College of Design in Pasadena, lives full-time in an Airstream trailer, and works with the Lumi team out of the industrial Lumi HQ near downtown Los Angeles.