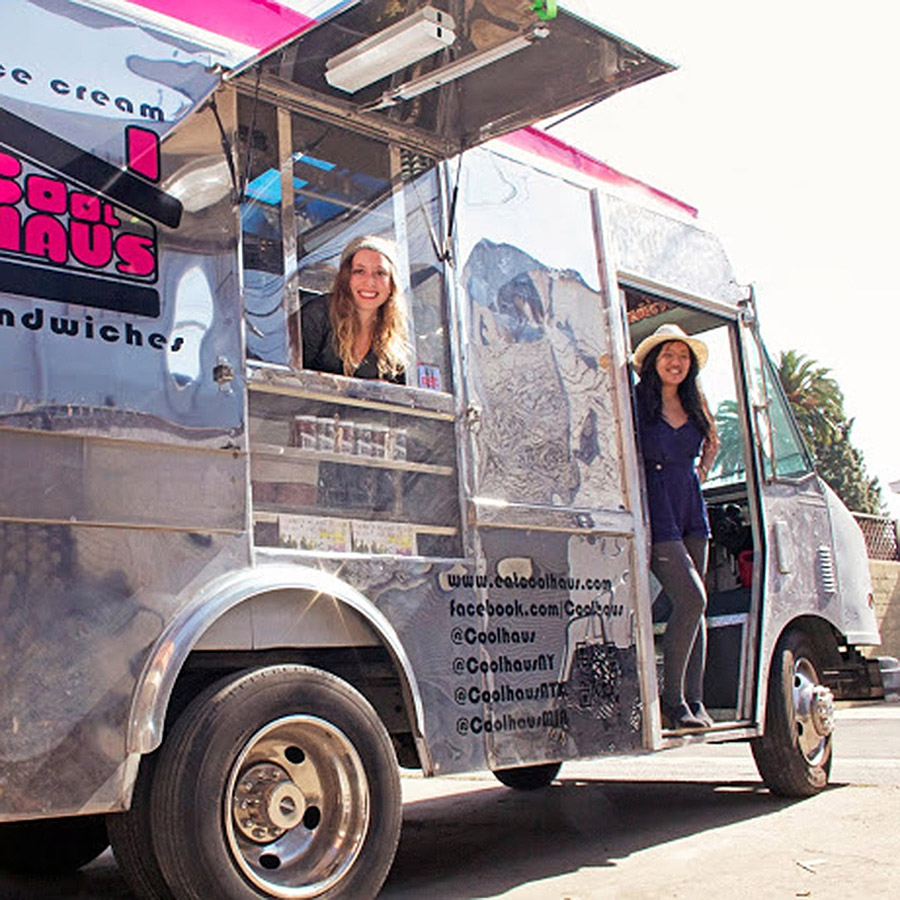 Cult favorite ice cream brand Coolhaus started in a broken down postal truck at the Coachella music festival. While growing their ice cream brand over nearly a decade, Natasha Case and Freya Estreller have many stories to tell, through marriage, two funding rounds, brick and mortar scoop shops, and fast growth wholesaling around the country. They explain how they’ve stayed true to their quirky past while scaling with manufacturing partners and keeping their marriage intact.

I was curious how they manage to constantly innovate, with such wacky flavors as balsamic fig mascarpone or buttered French toast, while they work with more traditional contract manufacturers to do the production. We get some invaluable tips for working with these co-packers, as they’re called in the food biz. I also wanted to hear their origin story, how their relationship blossomed as their company grew, and how Freya decided to leave the company with Natasha at the helm.

Celebrities like John Legend and Kumail Nanjiani are big fans and are willing to go to the Twitter mat over their product. But although it might seem like Coolhaus has made the big leagues, we hear about some of their challenges behind the scenes; being a founder never stops throwing you curveballs. We get a taste test of some of their most popular flavors, with a big side of great entrepreneurship and leadership advice to go along with it.

Natasha Case founded Coolhaus in 2009 with Freya Estreller after she was working in architecture at Walt Disney Imagineering. They launched their architecturally-inspired, unique ice cream sandwich company from their barely driveable postal van at the Coachella Music Festival to an audience of 100,000. They built a loyal following over the festival weekend and returned to LA to an abundance of viral press, a rapidly building social media following, and an eager foodie audience. Since then, Natasha has been named a Forbes 30 under 30 Food & Beverage, Zagat 30 Under 30, Linked in 10 under 35 for Food & Leisure, as well as being featured in many national publications and radio like Cosmo, Dwell, and NPR, and TV shows including Food Network’s Chopped, Barefoot Contessa, Unique Sweets, Good Morning America, King of Cones, Andy Cohen Live and many more. The company has become one of the leading innovative small dessert businesses, growing significantly to include 4 trucks and 2 storefronts in LA, 2 trucks and one cart in NYC, and 4 trucks in Dallas, Texas. Moreover, consumers can now find Coolhaus’ pre-packaged ice cream sandwiches, hand-dipped bars, and hand-packed pints in 6,000+ gourmet grocery stores nationally, including Whole Foods and Gelson’s, and larger retailers like Meijer and Safeway, and now internationally in Asia and the Middle East.

Freya Estreller likes bringing cool, niche products to the masses. She is Co-Founder of Coolhaus, an architecturally-themed and artisanal dessert company made famous by its ice cream sandwiches, which are now sold in over 5,000+ doors all across the US and internationally. Coolhaus also employs over 40 people in CA and NY with their 10 ice cream trucks and 2 brick and mortars. She is also CEO and Founder of Ludlows Cocktail Co., a start-up focused on crafting fun, innovative, and all-natural spirited products. She is currently Head of Operations at Tea Drops, an award winning woman owned company that makes Organic dissolvable teas. She was born and raised in Los Angeles (Atwater Village represent!) and has a BA in Sociology with a minor in Business from Cornell University. She is active in youth and entrepreneur mentorship and angel investing in start-up consumer brands.